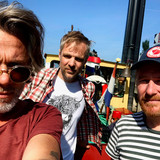 Bob Billy is a three-man band: one bassist (Hayo van Dusseldorp) setting the groove, one guitarist (Alexander van der Werff) playing those raw rock sounds, and one singer (Sander Kuit) belting out some melodious lyrics. To tie it all together, they build their own beats. The result? A catchy mix of rock, indie and electronics with just a hint of Depeche Mode and that old-school Beastie Boys-underbelly feeling set to the vibes of a drowsy, Wednesday evening at CBGB’S in the early 90s Over the years, Bob Billy has played and conquered the stages of Paradiso, the Melkweg, Patronaat, Het Paard, Vera, Dijkpop Festival and many bars in the Netherlands, Belgium and Germany. Being a crowd pleaser, the band is known for its live energy and ability to melt exciting beats and subdued melodies into a natural harmony. Bob Billy lives by the motto: ‘Let’s do a song a day/ record it right away/ play it live on Saturday/ and make a new video/ oh oh oh’. Always the maverick, Bob Billy has independently released the album The Horse Is The Cowboy, the EPs There He Goes, Just A Bunch Of Us and Hollywood Showers. Often enough though, Bob Billy just drops a track online whenever they want, so check out all those singles available on Spotify. http://www.bobbilly.com