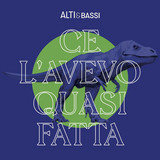 The band Alti &amp; Bassi is an a cappella group formed in Milan in 1994. With just their 5 voices and microphones Alti &amp; Bassi create their harmonies without accompaniment, imitating drums, bass, wind instruments and guitars.

Thanks to their original show formula the Alti &amp; Bassi have performed in important concert venues in Italy and abroad such as I Pomeriggi Musicali in Milan, the concert season of the Teatro Rossini in Pesaro, Voice Mania in Vienna, Vokal Total in Graz, the Conservatory in Torino, the Accademia Filarmonica Romana, Mi.To. Settembre Musica in Milan and also Blue Note Milano demonstrating that the “a cappella” musical genre has deep cultural roots that Alti &amp; Bassi use and transform in an extremely contemporary way. They have been awarded prizes such as “Premio Quartetto Cetra” in 1998 and “Premio Carosone” in 2006. In 2015 their new album “La Nave dei Sogni” received two nominations as the “Best Jazz Album” and “Best European Album”, at “CARA”, the most important worldwide awards dedicated to the a cappella genre. In january 2016 The Akademia Music Award in Los Angeles was awarded to “La nave dei sogni” by Alti &amp; Bassi as Best A Cappella song.