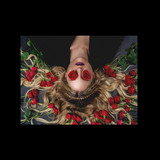 Pennsylvania pop singer/songwriter Rozes got her first big hit working with massive EDM stars the Chainsmokers before releasing her own debut EP. Born Elizabeth Mencel on April 14, 1993, into a jazz-loving family, she grew up in the affluent Philadelphia suburb of Montgomeryville. Taking to music early, she began piano lessons at age six and eventually became a multi-instrumental prodigy also proficient on clarinet, saxophone, guitar, violin, flute, and trumpet, as well as an accomplished singer. Mencel attended college in Philly for one year before dropping out to pursue music as a career. Her first recorded appearance, in 2014, was as featured vocalist on the song "Limelight" by young Australian EDM producer Just a Gent. The track was hugely popular, going on to rack up over 2.5 million listens on SoundCloud. Mencel was pleased by the reaction, but totally unprepared to find herself followed on Twitter by enormously successful New York EDM duo the Chainsmokers, who then contacted her to say they loved her voice and would be interested in collaborating with her. The result was "Roses," which she co-wrote and sang lead vocals on; the song went to number six on the U.S. Billboard charts, propelling her to fame at the tender age of 21. In 2015, Mencel released her debut solo single as Rozes, "R U Mine." Not content to simply ride the coattails of her Chainsmokers success, she immediately stood out with her original sound: lush, ethereal electronic pop with elements of house, EDM, synth pop, electro, and broken beat, and frank lyrics about the insecurities of young love delivered in a mature, sultry singing voice with a distinctive accent, heavily treated with effects. Two further singles followed, the gauzy "Fragile" and the up-tempo "In & Out." Both were included on Rozes' debut self-released EP, Burn Wild, which was released in February 2016. The next year, she joined Cash Cash on their single "Matches," which peaked inside the Top 40 of the Billboard electronic chart. After signing with Photo Finish Records in 2017, Rozes delivered a pair of solo singles, "Canyons" and "Famous," followed in 2018 by the Nicky Romero collaboration "Where Would We Be." All three songs appeared later that year on her Numbed Up EP, whose title track featured rapper NexXthursday. The following January, her single "Halfway There" became the official anthem for the 2019 Women's March, and she issued the mental health-focused "Call Me" in June. ~ John D. Buchanan, Rovi