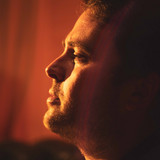 The Franco-British singer Kevin Norwood is back with a new album « Hope » that blends ingeniously an acoustic sound and electronics.   Kevin Norwood puts his voice and phrasing into the benefit of his songs. A voice that takes its time helped by the warmth of a singular tone. The band sounds like one, joining the breath and the strength of a knowing play that serves a songwriting sublimate by an inspired interpretation.The magic happens!   Since 2008, he has been involved in several bands. In 2013, he recorded his first album “Reborn”. Released in January 2015, the disc received praise from the press "Révélations Jazz Mag", "Découverte Jazz News" and also made the front page of "Open Jazz" by Alex Duthil, "La Matinale Culturelle" (France Musique ) and Xavier Prévost (Jazz Magazine). The record was spotted by David Linx who signed the liners notes and received the support of Jonathan Duclos Arkilovitch of the Victoires du Jazz.   In 2016, Kevin Norwood developed his project in search of an electro-acoustic color he calls on Rémi Ploton, both for his qualities as a pianist and for his taste for sound creation.   The same year, the Kevin Norwood Quartet reached the final stages of the Jazz Migration tour, Crest Jazz Vocal as well as the national competition “La Défense Jazz Festival”. Then the band went into an artistic residency at the Petit Duc at the end of 2018 for the creation of a new repertoire.