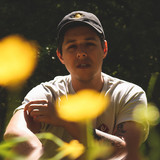 S U N B A T H E R is a DIY project that surprises. Fronted by Durham, NC citizen Joseph Picataggio, Sunbather blends his lush and expansive dreamy sound across several contrasting genres; everything from progressive rock / post-metal to shoegaze and dream pop, with a few subtle tendencies of IDM. Sunbather began as a solo project in the Summer of 2015. Always interested in learning about audio engineering to help his bands, he decided to sit down and write something one-hundred percent his own. Using the techniques he learned and a few he developed, Intrapersonal was realized in 2017. While Intrapersonal includes the spacey vibe he’s now known for, it had a heavier edge to it. “Coming off of the post-metal influence of Intrapersonal, I wanted to peel back the heaviness from that EP and explore more of the dreamy rock vibes that are buried in there,” he says. Melancholy Daze, his first full-length LP, was released in Summer of 2018 and included the addition of vocals. Fast-forward to Spring of 2020. Sunbather delivers his most fully realized songs to date. Seasons was released and celebrated his year long series of jams that came out every season from Spring to Winter 2019; each exploring a new concept of personal and emotional change. Shaving off even more of his alternative rock tendencies, Seasons dives deeper into the sounds of atmospheric dream and indie-pop. Sunbather is currently taking a break but will return 2022 with another surprising offering.