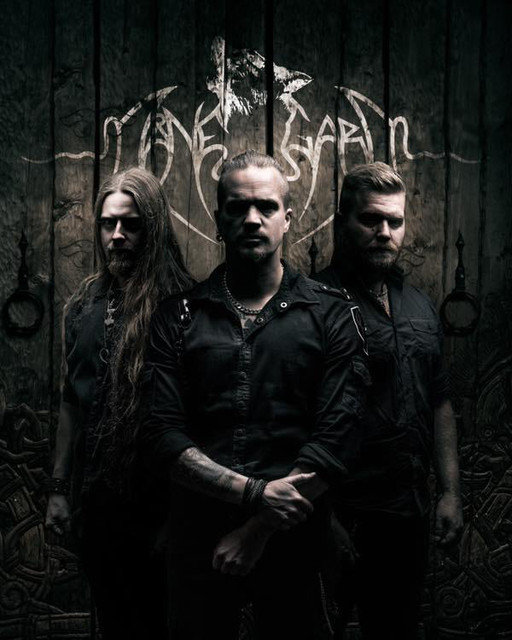 After wisely discarding their original name, Antikrist, following their first month of rehearsal in late 1995, vocalist Svenne Rosendal, guitarists Jonas Almquist and Mårten Matsson, bassist Pierre Wilhelmsson, and drummer/vocalist Erik Grawsiö came to be known as Månegarm -- the vampire wolf of Norse legend that is prophesied to devour the moon when the time of Ragnarök submerges this world under the oceans! Needless to say, this moniker announced Månegarm's newfound commitment to Viking metal, which they proceeded to refine from their home base of Norrtälje, Sweden, over the course of a pair of demo recordings: 1996's Vargaresa (Wolf's Journey) and 1997's Ur Nattvindar, recorded after the installment of new bandmembers Jonny Wranning (vocals) and Markus Andé (guitar, replacing Matsson). The second demo saw folk music elements gaining more ground within the band's complex sound, thanks to the addition of violins and female vocals in the studio, and it was this intrinsically Scandinavian new sound that landed Månegarm a contract with Displeased Records a short time later -- although they'd have to audition new singers once again, hiring Stockholm-based Viktor Hemgren, before starting work on 1998's official debut album, Nordstjärnans Tidsålder. The title, which translates to English as The Age of the Northstar, proudly proclaimed the group's Viking metal mission to a host of new fans, who eagerly embraced its striking marriage of black metal ferocity and native folk music, driven home yet again by the session female vocals and violins performed by Ymer Mossige-Norheim and soon to be permanent member Janne Liljequist, respectively. But hanging onto their male vocalists continued to pose a challenge for Månegarm, so after firing their most recent frontman, Hemgren, halfway through the recording of their sophomore album, Havets Vargar (meaning Wolves of the Sea, in case you were wondering), it was decided that drummer Grawsiö would cope with all vocals for the album that would eventually emerge in the year 2000. This elicited no complaints from the band's faithful fans, so after taking a short break to recharge their creative batteries, the same lineup got to work on next full-length Dödsfärd (Death Journey), which was released in 2003 and boasted both a greater variety of tempos (sub-light speed ones, to be precise) and more clean vocals mixed in with lingering black metal croaks. Both of Månegarm's now legendary demos were remastered and released on CD in 2004, and their fourth album, Vredens Tid (The Age of Wrath) arrived the following year, quickly being hailed as Månegarm's finest album thus far, and resulting in their first ever concerts on the European festival circuit that summer. Månegarm's next release -- a folk-infested EP entitled Urminnes Hävd (The Forest Session) -- marked the end of their relationship with Displeased, and the start of a new one with Swedish label Black Lodge, which quickly bore fruit in 2007 with the release of the group's sixth album, and arguably best yet, Vargstenen (Wolf Stone). ~ Eduardo Rivadavia, Rovi