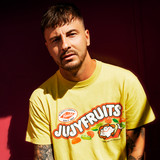 Faustix has over the years marked himself on the international music scene with a production-collaboration with Diplo on the smash hit ‘Revolution’, which became part of the Bernie Sanders presidential campaign. In 2016 Faustix remixed the official UEFA EURO song by David Guetta and Zara Larsson. Furthermore, he has done remixes/productions for the likes of Chris Brown, Icona Pop and Major Lazer and have had several nominations and wins at Danish Music Awards, Danish DJ Awards and Danish Club Awards. Faustix has achieved more than 300 million streams on Spotify on his own singles and remixes including his massive hits “Watching You” with the Dutch producer Alvaro, "Crying in The Sun", "Thorns" and “Need You”. Over the past year he has additionally started up his EP/album series “OMG It’s Lit”, releasing 6 already. The series is a tribute to club-music and has received massive support from DJs such as Diplo, Alvaro, Blasterjax, Hardwell, Tiesto and Ummet Ozcan. Furthermore he was announced to play some of the biggest festival stages in Denmark before Covid-19 hit. Recently he launched his own reality tv-show in Denmark about him and his family. The show is called “The Olsens”, where three seasons has already broadcasted and one more has been confirmed. In the fall of 2020, he participated in the massive TV-success Dancing With The Stars, which is one of the most watched programs on Danish national television.