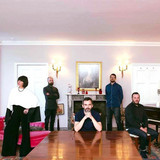 Crazy P are an English electronic group heavily influenced by vintage disco, soul, and house music. While early releases such as their 1999 debut album A Nice Hot Bath With... were instrumental and sample-driven, they established a full band lineup with the addition of ebullient frontwoman Danielle Moore, who joined in time for 2002's The Wicked Is Music. The group continually refined their sound through their energetic live shows, as well as exceptionally focused full-lengths such as 2011's When We On and 2019's Age of the Ego, which displayed their skills at crafting both pop hooks and exploratory grooves. Crazy P came from humble beginnings, when two musicians -- Chris Todd (aka Hot Toddy) and Jim Baron (aka Ron Basejam) -- met at Nottingham University in 1995. They spent much of their free time sampling records they had bought, utilizing an Atari and Akai S-Series sampler and generally playing around with the house and disco sounds they both loved. They named themselves Crazy Penis after an obscure late-'80s house record called "Loco Pinga," preferring the English translation for the shock value factor. After attracting the attention of local label Paper Recordings, they released their debut single, "The Way We Swing," in 1997, with "Get It On" following in 1998. These preceded the band's 1999 full-length debut, A Nice Hot Bath With… After meeting Danielle Moore over the course of their many excursions into Manchester's booming nightlife scene, they brought her into the fold, permanently altering their sound with the inclusion of female lead vocals and a greater pop sensibility. In the lead-up to their 2002 sophomore album, The Wicked Is Music, again on Paper Recordings, the band recruited two further members, bassist Tim Davis and percussionist Mav Kendricks, forming a full live band that went on to release two more albums, 24 Hour Psychedelic Freakout and A Night on Earth, through Shiva Recordings. In 2008, the band decided to modify their name, officially shortening it to Crazy P; Moore noted, "We wanted to grow, and keep growing, so there was no point in cutting our nose off to spite our face by keeping the original name." This coincided with their only lineup change, with Matt Klose taking over percussion from Kendricks for their fifth album Stop Space Return, this time released on acclaimed house label 20:20 Vision. Following the trend of two albums per record label, they also released their sixth effort, 2011's When We On, via 20:20. By 2015, Crazy P were responsible for numerous remixes -- often undertaken by Hot Toddy -- and multiple tours, including three in Australia, where they had a significant fan base. They capped the year off with the release of their seventh studio album, Walk Dance Talk Sing, switching to !K7 Records in conjunction with their own imprint, Walk Don't Walk Ltd., for its release. Following several years of worldwide touring, including dates supporting Chic and Chaka Khan, Crazy P returned in 2019 with Age of the Ego. While representative of the group's signature sound, the album's lyrics reflected a deep concern for the state of the world. ~ Liam Martin, Rovi