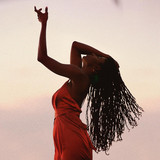 The story of Jah9's rise, is a triumphant melody stretching through time, acting on the ears of the present, calling spirits to the past, and heralding visions of the future. She emerged from the chrysalis of poetry, dub and spirit to become a powerful femiNINE energy within a universal grassroots movement of consciousness happening in Jamaica. Inspired by the open spaces in the instrumental dub of 1970’s Jamaican roots music, Jah9 sings with a voice that belies the dimensions of her physical body. She sings from a soul much older than its vessel; “reminiscent of that darkly operatic wailer for truth & justice, Nina Simone.” Her core philosophy is balance, which she delivers through her own, distinct Jazz on Dub style. Her latest album "Note To Self" has critical acclaim from The New Yorker, The FADER, Billboard, High Times and more.