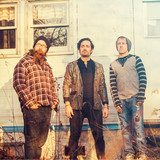 “The band brings a touch of psychedelic meets 90s indie rock to its joyful look. But that joy seems to have a layer of darkness simmering under it.” - Omar Kasrawi, Pancakes and Whiskey The smell of cold earth drying on leather boots. Driving old cars fast down deserted mountain roads. Storm clouds and brittle sunbeams. This is the essence of KITARI, an NYC based alternative rock band comprised of three childhood friends raised in the Catskill Mountains. A blend of Tame Impala’s neo-psychedelia, Jack White’s searing guitar and the cosmos-infused alt-rock of Incubus, the high-energy power trio combine dark, infectious melodies with epic, driving, space grooves. After playing in bands together throughout middle and high school, Ram Stamos (Drums), Adam Weyant (Guitar + vocals) and Jared Rinaldi (Vocals, bass + keys) went their separate ways, each having to endure some combination of homelessness, bad relationships, dead-end jobs and run-ins with the law. Ultimately, it was a renewed focus on their undeniable artistic chemistry and the music born of it that got them on track again. After writing and recording their debut EP as the newly christened KITARI, the band began playing shows in and around NYC. To date, they’ve rocked stages at such esteemed venues as Mercury Lounge, Arlene’s Grocery, Bar Matchless, the Shrine and Bowery Electric to name only a few. They’ve also received airplay on Radio Woodstock and have been featured in Pancakes and Whiskey.