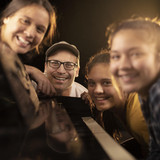 His voice is weathered and truthful, his lyrics, colorful and odd; he's been bending ears and genre lines through sage storytelling for years. His career in music and songwriting continues on a refreshingly honest course, writing chapters of courage and healing for family and fans alike. Elliott Park’s songs have been sung on the hallowed stage of the Ryman Opry Theater, as well as on major network programs like “Late Night With David Letterman”, and “The Late Late Show” with Craig Ferguson. In 2006, his song “I Loved Her First” hit #1 on Billboard and R&amp;R Magazines. While some of his more recognizable songs thrive in Nashville, his main body of work leans away from trend, toward a more unconventional telling of timeless truths. Father, friend, poet, artist... Elliott's music is a sentimental celebration of life's beauty and the wealth hidden within its difficulties. After years of writing songs behind the scenes, Elliott is emerging as an Americana artist for the masses. Stay tuned for new music at www.elliottpark.net.