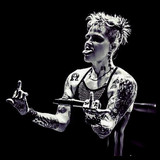 To truly make a difference, one must be different. From the very start, OTEP were always a band on a mission: to open minds, win hearts and to push music into places that it has never dared step before. Led by vocalist, lyricist and shamanic figurehead Otep Shamaya, the Los Angeles crew exploded into the consciousness of rock and metal fans worldwide with their debut album Sevas Tra in 2002. With their leader’s scabrous, evocative poetry front and center, OTEP’s hybrid sound immediately stood apart from the crowd while showcasing a liberated artistic philosophy that has driven band and singer breathlessly forward. Incorporating everything from heavy metal and punk rock to experimental electronics and cutting edge hip-hop, OTEP’s sound resonated strongly with a great and ever-expanding number of converts. Fittingly, given the insanity and chaos that has consumed the planet, Shamaya has had no shortage of fuel to throw on her compositional flames. It makes little sense that a band that believes in love, equality, strength, respect and unity should be regarded as Radicals. But right now, in this backwards world, voices as passionate and truthful as Otep Shamaya’s are few and far between.