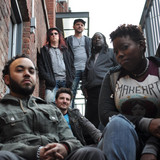 Check us out on Patreon! https://www.patreon.com/bandcalledfuse The Band Called FUSE creates original soul rock and hip hop music out of New York City where they host one of the longest-lasting live showcases (The Line Up). 4 albums.