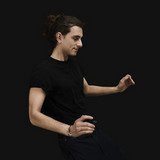 WOJTEK is a Polish-but-Berlin-based pianist and self-taught virtuoso deeply engaged in the climate movement and his new album Atmosphere was recorded and produced carbon neutrally. Wojtek approaches music with an intuitive reflection rarely found in a young artist. A student of architecture, Wojtek’s understanding of space and sound is audible in his music.   Album Atmosphere will sweep you along on a sonic journey, incorporating samples from the world around him, techno beats from Berlin basements and a spatial fluidity that defines Wojtek’s sound. Wojtek has built a position in his home country of Poland that has put him in headlining slots at festivals, under the cosmos in planetariums and in sold out ballrooms of countryside manors. Having been named the “Headliner of Tomorrow” in a nationwide talent competition, Wojtek is sure to capture not only hearts, but the passionate minds of fellow planeteers as well. 🌎