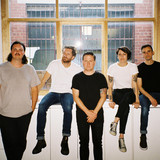 It’s not every day a band releases a love song inspired by a visit to a framing shop in Abbotsford, but for Ceres frontman Tom Lanyon it was just what he needed to break a year-long bout of writer’s block.   For a band whose breakthrough 2016 album, Drag It Down On You, was what Lanyon refers to as a “dark, bottom of everything kind of record”, Viv In The Front Seat is a life-affirming song of hope, of realising you’ve fallen in love with someone and can see your future unfolding in front of you. The lyric “I felt my life change” isn’t some empty sentiment, but a heartfelt account of the emotion as Lanyon drove to deliver the pictures to the woman who became his partner.   Recorded in Melbourne earlier this year with producer Tom Bromley, the Los Campesinos! guitarist who helmed Drag It Down On You, Viv In The Front Seat not only signifies a new beginning for Lanyon, but for Ceres in general.