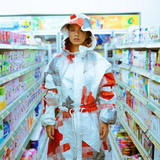 Simultaneously uncompromising, expressive and eloquent, Australian/Filipino alternative-pop artist Chela (birth name Chelsea Wheatley) has stayed true to her vision since she erupted through our collective speakers with her breakout single ‘Romanticise’. Her kinetic silhouette, garnished with a distinct tangerine mane, has been burned into retinas ever since. Recently passing over 20 million streams across her catalogue, Chela has a number of successful releases and collaborations that have seen her perform for huge audiences at festivals such as SXSW and Coachella. With collaborative credits alongside the likes of Banoffee, Paces, Goldroom, Clubfeet and more, music is Chela's lifeblood and it has been since she started out playing in punk clubs at 15 years old. Following a signing to Goldroom and R.A.C’s new label Minerva Music, Chela (now based in LA) released ‘Losing Belief’, “a mantra for those who lose belief in anything and need to be reminded that their own power is all they really need”. It’s the first in a string of new tracks produced by Chris Zane (Passion Pit, Bat for Lashes). Second offering ‘Heart O’ Hearts’ is an ode to inner conflict resolution and a mantra for quieting down the dark side of yourself. With more music on the way and live dates planned for both the US and Australia this year, Chela is bringing her clear creative vision to life.