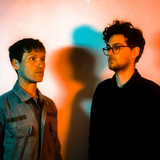 Step into Hi Frisco’s studio space and their music makes complete sense. Based in a block of creative spaces in East London, it’s a cosy, custom-designed room filled with an array of instruments and machines ready to pick up and use. It’s the kind of place to lose days in, though you’d be safe in the knowledge that anything put down in this space would no doubt come out sounding special. That’s what happened for Hi Frisco – combined of duo Henry Eastham and Felix Rashman – in their studio, Calmer Than You Are. The pair built the studio, kitting it out to be cosy enough for them to virtually live out of while promoting creativity and boundaryless thinking. Rest assured, there’s not many groups operating on the same sonic level as Hi Frisco. Their music is the perfect middle ground between experimentation and smart pop writing.

The duo quickly fell into roles that complimented and challenged the other to be bigger and better. Henry would bring new songwriting structures and ideas, while Felix acts as producer and “an editor”. The pair eventually found such a groove, they turned it into an egalitarian duo that push each other at every stage. Debut album 'Goodbye, Blue Monday’ continues the bold, atmospheric energy the pair look to bring to everything they create. Filled with bright, psychedelic textures and married with sweeping vocal performances, the release shows a solid depth to their sound and creates a vivid, technicolour return throughout.