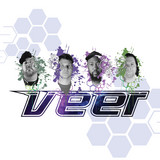 VEER is an award-winning hard rock band from Annapolis, Maryland, founded in 2016 by Ronald Malfi, Jon Malfi, Ryan Fowler, and Christian Mathis. Their debut album, Apocalyptic, Baby, was released on December 1, 2018, where it immediately broke the Amazon Top 100 rock albums. That same year, they were awarded Best Rock Band by the Maryland Music Awards, then received an award for Best Rock Song for their single, “Come Clean,” by the World Songwriting Awards, an international organization that promotes and recognizes songwriting in various genres throughout 129 countries worldwide. “The songs are about nothing and everything all at once,” says singer Ronald Malfi. “The music is midrange heavy but deceptively upbeat. The lyrics—the meaning behind the lyrics—are much darker than the casual listener might realize.” The track “Breathe” from the album and the subsequent Shut Up and Breathe EP, which also featured an acoustic rendition of the song, was added to Lou Brutus’s HardDrive Radio Playlist, and has since become the band’s most popular single. The band’s energetic live performances have quickly earned them a place among the mid-Atlantic’s elite, and they have been direct support for a number of national acts, including Buckcherry, Sponge, Fuel, Puddle of Mudd, Trapt and 40 Below Summer.