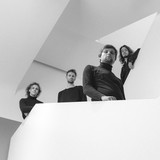 The Bad Tones is a nature and blues driven psychedelic rock quartet from Riga, Latvia characterised by dreamy guitars and wavy vocals. On the guitar, keys and vocal - Edvards Broders, behind the drums and supporting vocal - Kalvis Sležis, guitar, occasional keys and vocal - Rūdolfs Ozols, bottom end bass and the waviest vocal - Alberts Levics. All the members have been involved in the music scene of Riga from their early teens and playing in various different bands before founding The Bad Tones. In this ensemble they’ve found their unique sound by mixing skills crafted through classic rock and blues standards with the song writing approach of modern, independent music. The Bad Tones in their social presence and musical outcry accentuate the problems of art consumerism in the modern age and concentrates on getting the audience involved in the music listening process as it was done in the early days of sound recordings. The value of these experiences is the essence of the bands motivation and inspiration both musically and lyrically. Previously known as The Pink Elephant they've released 2 albums - “Mellowing” and “Cassette Concert”; As well as an EP “Bad Tunes” and full length album "Is It Good Enough?" under the new name The Bad Tones.