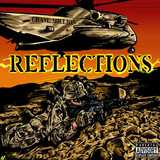 The Rocky Mountains may not be the first place that comes to mind when you think about famous Rap artists, but Chase Million is in the process of changing that with the upcoming release of his new album Reflections. His debut album is a compilation of captivating and moving pieces written over the course of ten years . Join Chase as he eloquently conveys a number of powerful messages that are sure to inspire the listener. The impetus behind that choice to make music came while serving his country as a Marine Rifleman deployed on the war torn streets of Iraq. Normally listening to his beloved Hip-Hop music provided an escape from the stress brought on by firefights and routine patrols but one night after a ferocious firefight he realized that it was time to follow his heart. The caustic events of that night ten years ago, and his devotion to the Hip-Hop culture, became the catalyst for the rising star, to begin composing his own songs. Ten years later his greatest inspiration and biggest fan is his beautiful daughter CoCo.