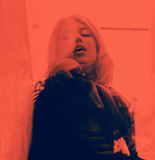 Jessie “DJ Nebraska” Davis is a Brooklyn based performing artist that can only be described as a one-woman CabaRave. Be it behind turntables, a microphone, or a table covered in synthesizers and loop machines, Davis ignites a fire in her audience with her powerful energy.

Jessie aka DJ Nebraska has spent the past 3 years touring extensively throughout the US, Europe, and Latin America. From Best Buy Theater in NYC, to Untold festival in Romania, to headlining LoopFest in Oregon, Davis brings the heat from the NYC underground to stages and dance floors all around the world.