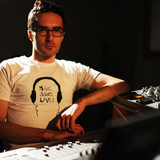 Philosophy Of Sound (P.O.S) is the brainchild of Polish born, Melbourne based producer Martin K, also known for his work as KOshowKO. Under the moniker ‘KOshowKO’ he released music on Emerald And Doreen, Clan Analogue and his own label Las Machinas as well as performed live at Renaissance Festival, Opoeia Festival, Electundra, St Kilda Festival in Australia and a tour across Germany. Martin was also a finalist of The International Songwriting Competition in the Dance category in 2009 and his music videos have also been screened around the globe in a selection of film and music video festivals. He also had the opportunity to work with such artists as Chicks On Speed, Yello, Severed Heads and B(if)tek. Based on the strength of early P.O.S demos, the artist gained the attention of Portugal based label Discotexas (home to Moullinex, Xinobi, Zimmer and Justin Faust among others). On Discotexas P.O.S released 2 singles and one EP (12” red vinyl), where among several tracks you could hear remixes from such artists as A.N.D.Y., Ilya Santana and Tronik Youth. When working on P.O.S tracks Martin K often collaborates with a wide range of instrumentalists and vocalists and POS’s first EP ‘Fragile Disco’ included vocals from Mereki (Goldroom, DCUP, Good Night Keaton) among several other musicians who contributed vocals, bass or electric guitar.