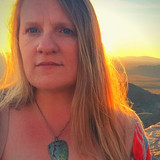 Rigby Summer weaves an Americana soundscape that reflects the road she’s traveled, from her Kansas City jazz upbringing to the beach pop of her former home in southern California to the red dirt roots of her current home in Stillwater, Oklahoma. While her influences range from Mary Chapin Carpenter to The Frames, Sia Furler to Johnny Cash, her sound often draws comparisons to Brandi Carlile and Lucinda Williams—a little modern, a little old-fashioned, always earnest. In 2017, after a five-year hiatus from performing music, she founded the Monday @ Modella songwriter pop-up and the ALL MUSIC STARTS LOCAL initiative and started sharpening her musical teeth, slowly carving a niche for herself in the Oklahoma scene. Since then, she has had the privilege of sharing the stage with and learning from a myriad of local and touring artists. Production is complete on her first full-length album “Geography," recorded at Naptime Studio in Norman, Oklahoma, with Kyle Reid at the helm. She is currently seeking radio and tour promotion and, pending pandemic conditions the album should be released in 2021.

Meanwhile, look for "Dancing Alone" a short cover record, also produced with Kyle Reid, that will be released in time for the holidays in late 2020.