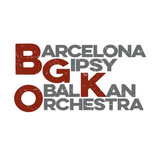 Barcelona Gipsy balKan Orchestra (BGKO) is an international ensemble of musicians based in Barcelona which is awakening the interest of audiences all over Europe through their genuine reinterpretations of traditional music from the Balkans, the Middle East, and the Mediterranean shores. On March 2018 BGKO will release their fourth album “Avo Kanto” (Satélite K, 2018), the continuation of a journey that started two years ago with "del Ebro al Danubio". “Avo kanto” means "grandfathers songs" in Esperanto, the only language capable of expressing the diversity of our band. The songs on the album are inspired by concerts, places, people, musicians, and moments that still move us: Traditional songs, interpreted throughout time, passed down through generations while never losing their power to evoke the deepest feelings of the human being. Today these songs rise again, touching us deep in our hearts and souls.