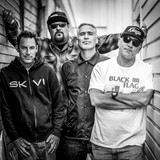 Few bands have endured with as much demonstrably California-encompassing vibrancy as the Hermosa Beach, CA institution that is Pennywise. They reign unchallenged, outside the margins of the mainstream, a staple on the SoCal radio airwaves and worldwide festival circuit revered and championed by generations of fans filling theaters and clubs. Pennywise possess the power to merge the subversive with the celebratory. Each Pennywise record is chock full of fast-paced anthems expertly engineered to inspire radical change, personal empowerment, relentless hijinks, and reckless fast times. On paper it may read like a mess of contradictions, but on record, it sounds like California. At this point, three decades since the band’s DIY beginnings, Pennywise classics like “Same Old Story,” “Fuck Authority,” “Alien,” “Homesick,” and “Bro Hymn” are as fundamental to punk rock and hardcore as stage dives and guitars. The defiantly titled Never Gonna Die is the first full album of brand new songs with singer Jim Lindberg, guitarist Fletcher Dragge, drummer Byron McMackin, and bassist Randy Bradbury in over ten years. It’s as timely as it is timeless, charging head first into the chaos of the current climate of the world with the tried-and-true determined sound the Pennywise faithful demand. Never Gonna Die was forged in the same space where the band penned classic songs with late bassist Jason Thirsk and produced once again by rock producer and close collaborator Cameron Webb.