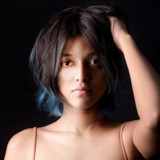 Yohani’s voice is arguably one of the most intriguing and exciting things you’ll hear. Each of the exploratory songs she performs live unravels and showcases a different layer to the singer/songwriter’s exceptional musicality. Yohani is a Sri Lankan Singer, Songwriter, Rapper and a Music Producer. Born and raised in Colombo, Sri Lanka, Yohani started her music career as a YouTuber. Her Singing and Rapping has earned her the title “Rap Princess” of Sri Lanka. Her debut single ‘Aaye’ premiered in August 2020. An unexpected twist for her fan base, Aaye dove deep into her personal journey; her experience in the industry and the public eye. The latter part of 2020 saw Yohani reviving the nation with her stunning singles. The second such being ‘Sitha Dawuna’; a collaboration with Chamath Sangeeth in September 2020. Third being a song that reverberated a wave of emotion through the citizens who endured a 30-year war in the island, especially those connected to the military personnel that fought in the front lines. ‘Rawwath Dasin’ was a tribute to Yohani’s father, a collaboration with Chanuka Mora that debuted in December 2020. This was immediately followed by her first English original ‘Merry Christmas Baby’ which premiered 21st December 2020.