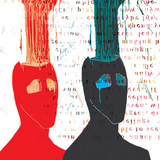 Turk & Divis (rhymes with biz) is electronic spoken word brother duo Evan and Miles Karp. From Savannah, GA and based in the Savannah and San Francisco Bay Areas, their first album Live @ Lone Glen was performed and recorded live in an Oakland basement as part of the Lone Glen writing, art, and performance series. The performance took place on August 5, 2016 and after mixing by Jay Rodgers of Full Moon Studio in Watkinsville, GA and mastering by Joel Hatstat Audio of Athens, GA, was released digitally on Jan 1, 2017. Album two features 50 Bay Area authors performing their own writing live at Quiet Lightning shows throughout the area, from bars and art galleries to museums, a transit center, and a state park, and was released on May 29, 2018 in digital, vinyl and cassette formats. They are working on three albums: one recorded in an old seminary in Mill Valley, CA; one at Fantasy Studios in Berkeley, CA; and one on a three-train Amtrak trip across the country, to be released in three parts: California Zephyr, Capitol Limited, and Silver Star.