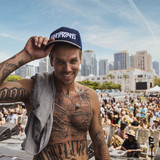 With the release of his genre-hopping debut album, Slum Beach Denny, it’s time to add DENM to the storied list of Southern California’s musical ambassadors. And like his predecessors- Sublime, Dirty Heads, and Slightly Stoopid,- the musician, songwriter, and producer drops plenty of hazy daze optimism into his melting pot of youth culture and life experience, emerging with a 21st century soundtrack from SoCal’s sun-kissed sand, surf, and streets.   Working, first as a producer, most recently as a songwriter and musician, DENM has been a highly sought-after creative force in the indie music scene for over a decade. He’s evolved, thankfully and successfully, from years as an admittedly troubled teen bouncing from beach town to beach town. And, as much as itinerant residencies in San Diego, Santa Barbara, and Isla Vista marked his personal narrative, they also fostered deeply authentic and eclectic sources of inspiration for the budding artist. DENM’s songs are notably genuine and reflective, not just autobiographically, but of the multicultural influences that surrounded him; revealing, if not celebrating, the seedier side of SoCal.   “Expect more out of me. I’m going to write about my life. I’m going to write about make-believe. Whatever. We’re just getting started. Slum Beach Denny is album one,” says DENM. “I’m living every day. There’s inspiration everywhere. I’m expecting to do this for the rest of my life.”