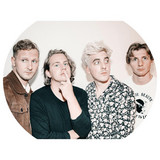 Known for their nervy, melodic indie rock, Britain's Circa Waves first gained buzz in the 2010s with hooky singles like "Get Away" and "Stuck in My Teeth." Centered on lead singer/songwriter Kieran Shudall, the band earned favorable comparisons to the Strokes, Arctic Monkeys, and the Vaccines even before they hit the Top Ten with their debut, 2015's Young Chasers. Without shying away from their influences, the band has matured, and albums like 2017's Different Creatures and 2019's What's It Like Over There? showcase their deepening maturity and knack for crafting their own distinctively infectious, post-punk anthems. Circa Waves was formed in Liverpool in May 2013 by guitarist and singer Shudall, who had decided to "knuckle down" and commit fully to music after spending years in a succession of no-hope garage bands. After writing a batch of songs and putting some demos online, he recruited second guitarist Joe Falconer, bassist Sam Rourke, and drummer Sian Plummer (replaced by Colin Jones in 2015), and the band undertook a few short tours of the U.K. and Europe. Their melodic, propulsive rock sound, heavily inspired by the Strokes and also often compared to the Vaccines, was well-received by audiences, and such a buzz built around them that they were soon offered a deal with Transgressive Records, erstwhile home of Foals, the Subways, and Mystery Jets. Their debut single, the double-A-side "Get Away"/"Good for Me," was released in December 2013 and was almost immediately hailed the "Hottest Record in the World" by taste-making BBC Radio 1 DJ Zane Lowe. On the heels of that first wave of excitement, Circa Waves released their debut full-length album, Young Chasers, on Virgin/EMI in 2015. Buoyed by singles like "T-Shirt Weather," and "Stuck in My Teeth," the album reached the Top Ten of the U.K. albums chart and paved the way for a series of well-attended live shows, including a sold-out date at London's O2 Academy Brixton. The reception they received for their debut instilled the band with a greater sense of confidence, and as a result they returned to the studio almost immediately after touring; with their renewed vigor they created a heavier, beefier sophomore record, 2017's Different Creatures. Produced by Alan Moulder, the album also fared well, hitting number 11 on the U.K. album chart, and spawning the singles "Wake Up" and "Fire That Burns." The band's third full-length, What's It Like Over There?, arrived in 2019 and included the single "Movies." It again found the band working with Moulder embracing a more nuanced pop sophistication. In early 2020, Circa Waves returned with their fourth studio album, Sad Happy, which featured production by singer Shudall and mixing from Matt Wiggins and Dan Grech-Marguerat. Prior to the album's full release, it was split in half and issued on two separate EPs, Happy and Sad. ~ John D. Buchanan, Rovi