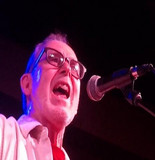 (With top 40 placement on national indie charts) Robertson has returned his focus as a solo Performing Songwriter. His new tunes are filled with delight and insight. Live appearances are jovial and engaging. You are likely to see Doug “playing without a net” as he dons his acoustic guitar and sings without a mic. Look for Dougs newest work “EPIPHANY”