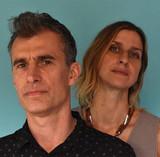 Earthphish was formed in Zurich, Switzerland in 2001 by Donovan John Szypura, Aleksandra Mirjana Crossan, and Andre Ledergerber. Earthphish later converted to a duo - Choreographer and Singer Aleksandra Mirjana Crossan and Composer and Producer Donovan John Szypura became a symbiosis of music and dance. They produced numerous award-winning contemporary dance pieces between 2001 and 2005. Their demo CD 'Metropolis' was produced in 2001, followed by their debut CD Soft Green Exit in 2003. The EP Earthphish was released in 2006. Then Earthphish fell into hibernation. When the world beckoned, Aleksandra and Donovan traveled continents and landed in Tasmania in 2012. A pole shift that likely influenced their new music for the new album ‘Turtles All The Way Down’. Musically, Earthphish sticks to its guns and remains on the darker side of the Pop world. In 2020 they released three singles, Rite of Life, Raincoat, and Deadlock. The latter is featuring Lee "Scratch" Perry, the grandmaster of Reggae and Dub. The new album 'Turtles All The Way Down' has been released on the 21st of December 2020. Earthphish’s latest single 'Between the Bards' pays tribute to Elliott Smith, the song was released in July 2021.