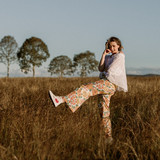 MARLOE. burst onto the scene in 2019 with her stunning self-titled EP, which put her singular brand of dazzling electro-pop on the map. The elegant EP - produced by Grammy-nominated producer Matt Bronleewe and including empowering breakthrough single ‘The Future Is Now’ - saw her balance gut-wrenching pop and heavenly electronica in songs of self-determination, liberation and wounded romance. Fast forward to 2021 and MARLOE. Is set to ignite her fan base once again with her biggest and boldest music to date. Beginning her career being likened to pop heavy hitters such as Vera Blue and more recently Olivia Rodrigo, MARLOE. has perfected her sound and found a lane that sees her starry-eyed vocal entwined with a newfound and powerful attitude. This unique brand of electro-pop has seen MARLOE. championed on-air by the likes of triple j’s Home and Hosed, triple j Unearthed, 4ZZZ and B105. Among previous releases, MARLOE.’s international success saw ‘You Don’t Know Me’ landing a Nissan commercial in the US and her track ‘The Future Is Now’ charting #1 on the What's In-Store Music Charts, with the single being played over 82,000 times across retail stores in one week in the US. In recent times MARLOE. has also co-written music with Kate Miller-Heidke and worked with Evan Klar & Konstantin Kersting respectively. Dive into the world of MARLOE. as she welcomes you into her space of authentic, attitude-filled electro-pop that will leave you in awe of what is to come next.