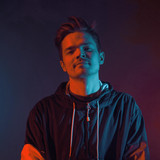 DJ & Music Producer Ilja Eriksson was born in Perm, Russia and raised in Sandviken, Sweden before locating to Oslo Norway. During his teenage years the interest for music evolved into music production. Inspired by artists such as Tiesto, Madeon and Proter Robinson, he began experimenting with different electronic music styles. In 2017 ILYAA released his first single «Singularity", co-produced by Mats Forøy and co-written by Marius Njølstad aka. Madden and Andreas Garmark aka. 6AM was charted on Norway's biggest EDM radio station, NRKmp3 as well as being added to both New Music Friday Norway and New Music Friday Iceland on Spotify!   ILYAA´s music has received good reviews and support from Hardwell, Don Diablo, Seeb and recently released his remix of ”Yellow” by Tobtok, Oliver Nelson & Liw Dawson. In the last years, ILYAA has been resident DJ at the biggest clubs in Oslo and working on his upcoming releases.