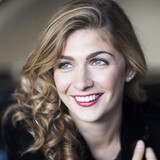 New on YouTube youtube.com/CordeliaWilliams Cordelia Williams is recognised for the poetry, conviction and depth of her playing. ‘Commanding and sensitive’ (Sunday Times), she has performed all over the world, including concertos with the English Chamber Orchestra (in Mexico City), City of Birmingham Symphony Orchestra and Royal Philharmonic Orchestra (at Barbican Hall, London), as well as recitals at Wigmore Hall, Royal Festival Hall and Beijing Concert Hall. Her recordings include the music of Schubert and Schumann; her latest CD, featuring music by J.S. Bach and Arvo Pärt, was described as a ‘superb concept... brilliantly realised’. She is interested in creating unusual projects with other musicians and across disciplines. She is currently collaborating on new work with award-winning poet Michael Symmons Roberts and former Archbishop of Canterbury Lord Rowan Williams. Her new CD, Night Light, will be released on 1 August 2021. Since becoming Piano Winner of BBC Young Musician 2006, she has enjoyed traveling and performing around the world. Cordelia welcomed her first son in 2017, who has accompanied her on several concert tours and was recently joined by a brother. Her YouTube channel, featuring performances, practice tips and life as a concert pianist, is youtube.com/CordeliaWilliams