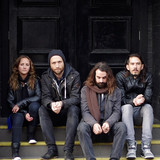 Meniscus are an instrumental post-rock band based in Sydney, Australia. The group consists of guitarist Daniel Oreskovic, bassist Alison Kerjean, drummer Alex O-Toole, and visual artist Martin Wong. They have been compared to artists such as Mogwai, Sigur Rós, ISIS and Cog. Described by the press as “forward-thinking” (The Drum Media), and “epic, symphonic and melodic” (Triple J), Meniscus seamlessly blend together elements of Guitar-driven ambient soundscapes, hard-rock, electronic and psychedelic music. Originally starting out as a three-piece in 2005, Meniscus have since expanded their live show to include video projections, mixed live by Martin Wong, and have released three records: absence of i (European tour edition) (2007), war of currents (2011) & Refractions (2016). Well received by both fans and the media alike, the latter describing Refractions as “…executed ‘Refraction’ with perfection. No instrument feels out of place at any point of time whatsoever” (Echoes and Dust)