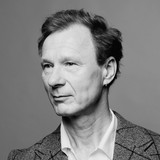 Ismo Alanko is a popular Finnish musician, revered critically for both his early new wave and post-punk bands, Hassisen Kone and Sielun Veljet, as well as his later solo career. Alanko has earned his place in the royalty of Finnish language rock and pop music primarily for his unique talent in transforming himself to match current trends while still making popular music that is intelligent, socially conscious, and immediately recognizable. Alanko was born Ismo Kullervo Alanko on November 12, 1960, in Helsinki, Finland. His solo career began when Sielun Veljet broke up, and his debut, Kun Suomi Putos Puusta (When Finland Fell Out of the Tree), was released in 1990 to critical and popular acclaim. The album used sounds of nature as background and percussive instruments and was recorded all across Finland in mostly natural settings. Its follow-up, Jäätyneita Lauluja (Frozen Songs), was radically different and featured a highly synthesized techno-pop sound. Both albums were wildly popular and established Alanko's chameleon-like ability to reinvent himself. The only true constant over the years is his immediately recognizable singing style. Alanko's vocal instrument is capable of interpreting his renowned, poetic lyrics in a particularly expressive manner. His first four albums were all released as solo works, but from 1998's Pulu (Pigeon) onward, most of his records have been released under the name Ismo Alanko Säätiö (Ismo Alanko Foundation). The band has featured a fluid lineup of over 30 different musicians and is an extension of Alanko's solo work. His albums are always popular, even when of a sometimes radical variety. Hallanvaara from 2002 was dark and somber and featured orchestral arrangements for instruments as varied as glockenspiel and musical saw, while 2005's Minä ja Pojat (Me and the Boys) is a rough and loose rock album informed by the sound of Queens of the Stone Age and System of a Down. Hallanvaara also featured Ismo Alanko's brother, Ilkka Alanko, the lead singer of the popular band Neljä Ruusua, on background vocals. Alanko has also composed music for theater, film, and TV shows. He has written a play and performed the role of God on a Finnish television program. He briefly worked under Esa-Pekka Salonen as a member of the prestigious Helsinki Festival artistic committee. During his long career, Ismo Alanko has earned 16 gold and seven platinum records. ~ JT Lindroos, Rovi