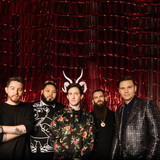 Where most bands erroneously claim wholly distinct identities, Dance Gavin Dance truly defies categorization. The Sacramento based outfit possess the kind of artistic compass shared with broadminded but heavy metal & hardcore-punk rooted iconoclasts like The Mars Volta and Coheed & Cambria, but use it to diverge wildly, charting a new course that incorporates the melodic screamo of Thursday or Taking Back Sunday, with a taste of the earnest pop melancholy of Death Cab For Cutie.

The current & most definitive incarnation of Dance Gavin Dance is responsible for half of the band’s albums. There’s the angelic & R&B infused highs of the sweet voiced Tilian Pearson; the unhinged guttural growls & chaotic screams of cofounder Jon Mess; the dizzyingly unpredictable arpeggio-led guitar crunch of cofounder Will Swan; the soulful poly-rhythmic backbone of longtime bassist Tim Feerick; & the mind-blowingly powerful nuanced foundation laid by drummer and cofounder Matt Mingus. Now more than a dozen years on from their inception, Dance Gavin Dance celebrates an insurgent career, in the tradition of iconoclastic artists from Frank Zappa to Nirvana who did what they wanted, how they wanted, confident that an audience would catch-up. Eight studio albums deep, a thriving fanbase champions the band’s irreverent diversity & propulsive power.