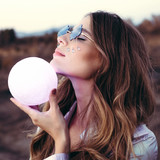 Laura Rizzotto is a Latvian/Brazilian singer/songwriter based in Los Angeles, CA. She released her first self-written album at 17 years old with Universal Music Brazil. Since then, Laura has taken the independent artist route and released another album as well as an EP with all original songs. Laura is a Berklee Alumni, CalArts grad and has a Masters degree in music from Columbia University. The artist has shared the stage with stars like Demi Lovato, Colbie Caillat and Rosanne Cash. She has also collaborated with Grammy Award winning maestro Eumir Deodato and worked as a Portuguese vocal coach for global superstar Jennifer Lopez. The singer, who is now a voting member of the prestigious Recording Academy, also represented Latvia in the Eurovision Song Contest 2018, the biggest music festival in the world, where she performed her original song “Funny Girl” for an audience of nearly 200 million viewers. In 2019, Laura made history with the release of a holographic performance of her single “One More Night” on the Metastage app, becoming the first artist ever to release a new song with a volumetric performance