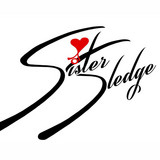 The sibling vocal group behind the exemplary togetherness anthem "We Are Family" (1979), a chart-topping, platinum-certified, Grammy-nominated mainstream breakthrough, Sister Sledge reached their commercial peak during the disco era but had been recording since the early '70s, and have remained active in the following decades. The versatile Sledges ably covered Jackson 5-style pop-R&B, Philly soul, funk, and disco before they teamed up with Chic's Nile Rodgers and Bernard Edwards to achieve mainstream fame with the title track off We Are Family, a Top Five pop album with additional dancefloor classics such as "He's the Greatest Dancer" and "Lost in Music." By the end of the '80s, Sister Sledge had also produced their own material and worked with the likes of Narada Michael Walden and George Duke, and topped the U.K. pop chart with the bubbly "Frankie" (1985), produced by Rodgers. They've recorded infrequently since then and have continued to perform into the 2020s with varying lineups.

Having performed at church and school programs and at fashion shows and political events, North Philadelphia natives Sister Sledge got their commercial start in 1971, when siblings Debbie, Joni, Kim, and Kathy ranged in age from 12 to 16. Under the name Sisters' Sledge, they debuted that year on the local Money Back label with "Time Will Tell," written and produced by Marty Brown (who had just scored a hit with the Stylistics' "You're a Big Girl Now"). Subsequently signed to Atco, the Sledges released a handful of singles over the next three years and during the same period continued to branch out abroad with performances in Tokyo and at the momentous Zaire 74 music festival. "Mama Never Told Me" was their first U.K. chart entry (peaking at number 20) and was followed by "Love Don't You Go Through No Changes on Me," the group's first single to make a commercial impression in the U.S. (number 91 on the pop chart, number 31 R&B, and number five on the dance chart). Circle of Love, their first album, was racked in 1975 and landed at number 65 on the R&B chart. It was produced by Bert DeCoteaux and Tony Silvester, while most of the material -- "Love Don't You Go Through No Changes on Me" included -- was written by Gwen Guthrie and Patrick Grant.