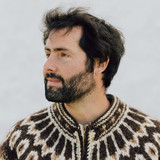 Patrick Dexter's debut album, Solace, was always intended to be as raw and intimate as humanly possible. To achieve this, the globally-renowned cellist recorded his cello completely unprocessed — as you would hear it if you were sitting in his back garden. “Folk and traditional music both have these simple melodies, and they can really reach out and touch hearts," Patrick explains. "That's why I think they transcend centuries. I wanted to explore traditional music, but with my cello, because it has become like my voice." Exploring themes of home, the natural world, and the dichotomy of despair and joy found in both the landscape of the west of Ireland and the sonic depth of the cello, Solace taps into a vitality and humanity not easily explored. The album begins with ‘Féile’, a piece of Patrick’s own composition, named after his niece. “Féile was born in the middle of winter at the end of 2020,” Patrick says. “For most people, a very dark, difficult time. She was born just before the New Year, and it was such an explosion of joy. I thought: ‘there's still beauty in the world.’" Weaving through the complex and fascinating history of traditional Irish music, as well as his own personal history, Solace also revisits classics like ‘Raglan Road’ and ‘Mná na hÉireann’ (Women of Ireland). A vast, accomplished and incredibly life-affirming body of work, the record comes during one of the darkest moments in human history, from an artist who has so much more to offer.