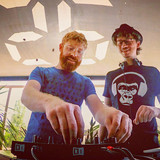 Based in Germany, Pierrot Hoepfner, aka Fin, and Benjamin Will, aka Stanley, have taken centre stage in the DJing world and certainly raised the bar within the music industry as a whole. Their pumping and driving tech house filled with smooth deep, minimal beats and groovy baselines are highly recognised leaving their audiences wanting more. Have made it look easy, but it’s their determination and creativity that’s helped them prosper so rapidly in such a short time. Before long support from the upper echelons of house and techno quickly burgeoned, with Marco Carola, Paco Osuna, Steve Lawler, Nic Fanciulli and Sam Divine continually advocating their productions. In 2019 they thrilled their audience on open-air events and festivals and became part of the Grey Bar Hotel Showcase series. One year later, the duo celebrates their first #1 in Beatport Releases Chart. (Filty Beat/ Selectro) Now, with regular podcast on Dance FM Romania and with releases already lined up on top labels and soon on their imprint Two Dudes Records, fans of their powerful musical aesthetic have an exciting 2021 to look forward to. Catch them live and you’ll know. Fin & Stanley are here to stay!