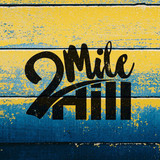 Barbadian band, 2 Mile Hill, has shared the stage with some of the world’s biggest and most talented stars: Angie Stone, Damian Marley, Erykah Badu, Sizzla, and Wyclef Jean, to name a few. They’ve also racked up awards and accolades at home in Barbados, and from MTV, Louis-Vuitton Moet Hennessy and RyanSeacrest.com. But this is only part of their story. Bandmates since college, Mahalia (lead vocalist), André (keyboardist), Russell (guitarist) Kris (bassist) and Chadd (drummer), have mastered a formula for rotation-worthy records, that have made them a household name on the island of Barbados and throughout various parts of the Caribbean region. In addition to making hit records together, the band is also the founder of one of the island’s biggest local music festivals, Mahalia’s Corner.