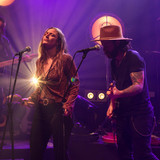 Irish-born/Liverpool-based duo Seafoam Green - singer/guitarist Dave O’ Grady and singer, although that word doesn’t even really begin to cover it, Muireann McDermott Long - specialise in what we now call Americana. If you want blues, gospel, and folk, they’ve got it, but what they’ve actually perfected across their two albums – the widescreen rock and roll of Topanga Mansion and the even warmer again/how-did-they-manage-to-top-that new record, Martin’s Garden, as well as countless live shows around the world, is the sound of a glorious rock n’ soul revival. Overdriven guitars in the key of G, glass slides on fret boards, Hammond organ and tinkling pianos, tambourines and drums that sound like they were recorded on a riverboat going down the Mississippi, and – on top of it all – two voices combining in a way that would give the most fervent non-believer religion. Seafoam Green even find room for a dash of Dublinese, just to remind people where they’re coming from. Heavy hitters like Rich Robinson, Derek Trucks, and Tyler Greenwall have all chipped in, and it’s not hard to hear why, for this is thrilling, vital, and – that word again - soulful music. Pat Carty - Hotpress Magazine (IRE) Classic Rock Magazine - “Stunning…9/10”, Country Music Magazine - ★★★★★ Hot Press Magazine - "Instant Classic...9/10" Classic Rock Mag - "First-class southern soul MoggBlog - "Bathed in vibrance ...Instantly becoming rock royalty" Americana UK - “Glorious”