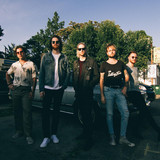 Formed in 2014, Modern Space have spent their brief existence becoming one of Canada’s most promising young bands on the rise. Catching their first break in 2016 by supporting Hamilton rockers Arkells across Canada, the Toronto quintet followed that up with the release of their spirited debut EP, Before Sunrise.

The debut single from that EP was the irresistible “Pen To Paper,” which found plenty of love on modern-rock radio. When it came time to re-enter the studio, the band had already spent time writing in Los Angeles, Vancouver, and of course, Toronto, before settling on Brooklyn, where they would work with Canadian legend-in-the-making, Gus van Go (Hollerado, Arkells, The Stills). Modern Space have recently released their new album Flip For It, which contains the frenzied energy of their first single "Just Quit" as well as the subtle groove of follow up single "Flip For It."