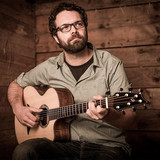 Ever since he was a young boy the guitar has always been vital for Timo Brauwers. Timo first listened to fingerstyle guitar when he was 20 years old. Franco Morone did a concert in his hometown and from this moment he knew what and how he wanted to play. Since then the steel string acoustic guitar has been the instrument that helps him the most to express his emotions and his moods even if Timo is also playing the electric guitar in several rock and metal bands. Musical diversity is really important for him. Timo basically mimics a whole band on his instrument by playing the melody, the harmony, bass and percussions all together in his fingerstyle songs. In his songs Timo is trying to send us to a journey where we would remember good times and feel better about bad times. Timo’s debut album called "On my way" was awarded the first prize as Best Instrumental Solo Artist and the second prize as Best Guitarist in the German Rock and Pop Award in December 2010. In 2014 Timo founded his own label ACOUSTIC DELITE. Besides all that Timo has been passing on his knowledge to his guitar students since 1999.