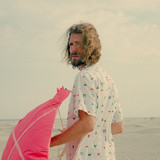 Max Berend de Boer is a Swiss-Dutch singer-songwriter. Born and raised in Davos, he now lives in Bern and St.Gallen, Switzerland. He took his first and second forename as his artistic alias, so he could always tell his musical stories with authenticity. In April 2020, he started a collaboration with producer and musician Patrick Vido on his debut album called ‘Red Little Paper Kite’ in their artistic home base, Bern, and his childhood home, Davos. Patrick Vido is the Swiss musician and producer of Slovakian descent behind the music from the debut album of Max Berend. Born and raised in the region of Lucerne, he lives with his family in Bern. With ‘Red Little Paper Kite’, Max Berend shares his stories with their warmly produced, acoustic and folk infused indie pop-rock music. He lets the stars tell their stories. Dreams about the future on a swing. Plants a flower for every friend and the unknown end-of -life. Drinks a Jenever to his loved ones, those who remember him, and those that have forgotten him. Writes a letter to his father, his best friend. Opens an umbrella for a woman in the rain. Walks one last time through his grandfather’s garden up to the dunes, where he meets Martha, his grandmother and finally also himself.   More Information can be found here: www.maxberendmusic.com Co-Composition and Production Credit: www.patrickvido.com   Photography and Artwork Credit: Maximilian Lederer | www.maximilianlederer.ch