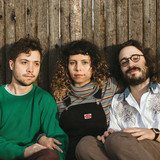 Down Time formed in 2015, with no intentions, with no ego—the way groups of friends gravitate towards like-minded people. The jamming, the casual creative sessions, and early live performances eventually became the collection of songs on Down Time’s first EP, Good Luck!, released in 2017. It’s an inviting handful of bedroom indie rock—the type of glass-half-full songwriting that at once delights, consoles, and rewards multiple listens. From there, the band grew its regional fanbase outside of Denver—touring throughout the South West and West Coast and performing with the likes of Snail Mail, Liza Anne, The Shacks, Palehound, and The Reptaliens. What listeners connect with is Down Time’s innate humanity—both in terms of affectionate melodies and lyrical benevolence. This communal atmosphere of creativity soon linked Down Time with Patrick Riley and Alaina Moore of Denver band Tennis. Riley and Moore recorded Down Time’s debut album Hurts Being Alive in June of 2019, marking a leap forward for the band in terms of scope and vision. Listening to Down Time is like going home—whether that be in a drive along a mountain range, in a sound, or in a feeling. Down Time brings excitement to familiarity. It’s a conversation between three friends that invites the listener to be part of the family.