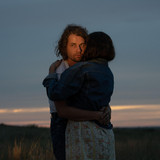 Singer/songwriter Kevin Morby broke out of the shadows into a fruitful solo career, penning songs that melded Dylan-esque lyrical mystique with rootsy production. Along with contemporaries like Angel Olsen and Kurt Vile, Morby represented a wave of sharp, indie-bred 2010s songwriters whose audiences grew exponentially as they came into their own. Morby's development was particularly quick, his vision taking shape in a string of well-received records that included 2017's pristine City Music, 2019's conceptual journey Oh My God and 2020's relatively spare Sundowner. Based in Los Angeles, Morby originally moved from his native Kansas City to Brooklyn in the mid-2000s, eventually joining the noise-folk group Woods on bass. While living in Brooklyn, he became close friends and roommates with Cassie Ramone of the punk trio Vivian Girls, and the two formed a side project together called the Babies, who released albums in 2011 and 2012. Following his move to L.A., Morby recorded a collection of songs with Babies producer Rob Barbato that was intended to be an homage to New York City. The new songs represented a stylistic shift into a more roots-oriented indie sound and also featured Babies drummer Justin Sullivan along with several other guest artists. Released in 2013 by Woodsist Records, the eight-song collection was called Harlem River and became Morby's debut as a solo artist. In August of that year, Morby relocated from his Brooklyn dwellings to Los Angeles, quickly beginning work on what would become his second solo album, Still Life. The album was released on the Woodsist label in late 2014. His next record was informed by two developments: he moved to a house with a piano, and he played in the Complete Last Waltz, a group formed to pay tribute to the music of the Band. The first changed the way he wrote songs; the second meant he hooked up with fellow bandmate Sam Cohen of Yellowbirds and the two began collaborating. The recording of Morby's first album for his new label, Dead Oceans, took place in Woodstock, New York and featured appearances from keyboardist Marco Benevento and Quilt's John Andrews on musical saw. Singing Saw was released in April of 2016. The following year, a companion piece, City Music, was released. Recorded at the analog-centric Panoramic House studio in rural West Marin, California and prominently featuring its 19th century pump organ, the album saw Morby channeling Lou Reed and Patti Smith in a collection of introspective vignettes. It would be two more years before he followed up with fifth effort Oh My God. The sprawling double album was semi-conceptual, with each song centered around loose religious themes. Adding to the concept of the album, some songs were stripped down to just one or two instruments rather than the relatively saturated instrumentation of Morby's other albums. A return to demo'ing songs on his cassette four-track resulted in the rough and gritty Americana of sixth full-length Sundowner. The album arrived in October 2020 and included the song "Campfire" with Waxahatchee's Katie Crutchfield. ~ Timothy Monger, Rovi