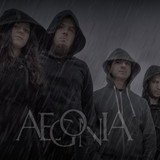 Aegonia is a metal band from Bulgaria. We develop our music in two directions – one is atmospheric fantasy metal, and the other – folklore. FANTASY METAL Aegonia was founded by Eli and Niki. We started by playing short improvisations on a guitar and violin without any speciffic plans for the future. Then we began to add vocal lines and lyrics, which were generally improvisations. We soon noticed that the lyrics were connected to each other and were telling us a fantasy story. We were so excited by this discovery, that we started thinking about this all the time. Eli decided to write this story as a fantasy novel with writer’s name Nea Stand. The writing process led to more music, and the music – to more facts from the story. Every new song we wrote was like another piece of the puzzle that we later called “The Forgotten Song”. When we completed “The Forgotten Song” we realized that this is not the end of the story. We called our fantasy series “Tales from the lands of Aegonia”. We already have book one (“The Forgotten Song”) and book two (“The River Of Memories”). We are currently working on book three. FOLKLORE We have always been fascinated by the beauty of nature and the authentic folklore music. Our songs with lyrics in Bulgarian sound pretty much like authentic Bulgarian folklore songs.

Eli and Niki even played in a traditional orchestra for authentic music for two years. This influenced us deeply and inspired us to compose these songs.