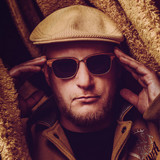 Echoing the career path of Plan B, German vocalist Flo Mega started out as an MC before finding fame with a sound inspired by the classic soul music of the '60s and '70s. Born Florian Bosum in Bremen in 1979, he developed a love of hip-hop from a young age and, influenced by the likes of N.W.A and Ice-T, regularly showcased his freestyling skills during performances with his fellow hometown rapper FlowinImmo. But after attending performing/visual arts college Hochschule für Kunste Bremen, he realized he was a better singer than MC, and began to focus on a retro soul sound instead. Recruiting his own five-piece backing band, Ruffcats, he signed to the Four Music label, where he released his debut album, Die Wirklich Wahren Dinge, in 2011, the same year he finished runner-up to singer/songwriter Tim Bendzko in the Bundesvision Song Contest with the single "Zuruck." ~ Jon O'Brien